As Easter approaches each year we tend to see a surge in demand for Bunnies! As these campaigns have to be planned out quite far in advance this can start as early as January for companies planning to release campaigns in the Spring. This year has been no different to usually and Rabbits have been in hot demand these past few months. One of these assignments was for a request from Look Magazine, a British publication. Look is a glossy high street fashion and celebrity weekly magazine for young women.  The magazine focuses on fashion, high street shopping advice, celebrity style and news, and real-life stories. The magazine was planning a spring themed photoshoot and were looking for a couple of bunnies to pose alongside some props such as perfume bottles.

After sending them lots of options to choose from, a decision was made to use Kira and Bucks Fizz who were both siblings and would get along great on set.

Both bunnies travelled over to the studio in North London where they were greeted by lots of fans! There were plenty of special cuddles for them from the team. 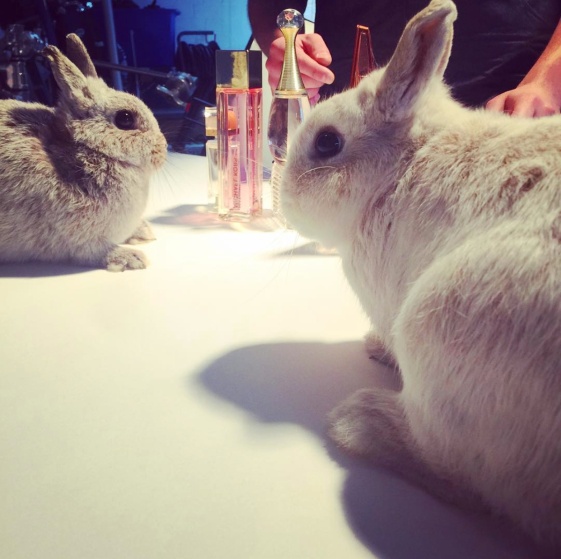 The bunnies were given some time to get acquainted with their co-stars, a selection of different perfume bottles! The positioning and lighting were all co-ordinated for the optimal images. Neither bunny was phased by all the attention and they were used to the camera flash.

As you can see from the above the end-results were absolutely stunning. There were plenty of fantastic images to choose from. Kira the grey bunny was especially a little star as he was quite willing to put his paw up on a prop or to wrap his paw around it as if he was holding the object.

After a really fun day the bunnies headed home to get some well deserved rest and to rejoin the rest of their family. It was then to be a couple of weeks wait before the article and accompanying images were to be published.

The February issue of Look Magazine did not disappoint. Both rabbits looked fantastic in their triple-page spread.

We had a lovely cover shoot for London Magazine last year using our French Bulldog model Harper and this year they approached PetLondon Models again looking for a fresh face to use for their March issue. This time the brief was for a white West Highland Terrier.

All of the PetLondon Models in this breed category were reviewed and the lucky chosen terrier was Poppy a gorgeous three year old from Worthing. Poppy has an excellent temperament and loves attention, she is also super cute in her profile pictures. 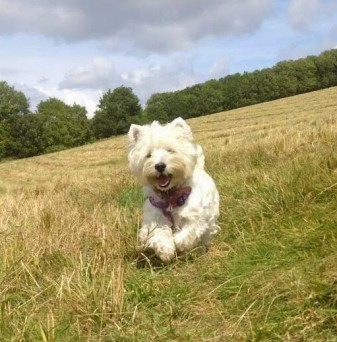 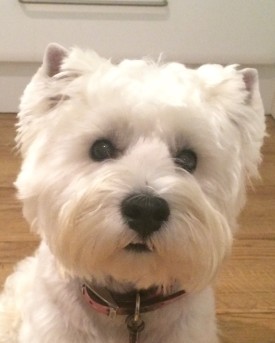 Poppy had a special bath right before the shoot to make sure she was as white as can be and was excited to be chosen for this opportunity.

Arriving on set it was clear why this breed had been chosen. The set was entirely white! The location was a stunning residential property where all the furniture, walls, carpets etc were all brilliant white. Poppy’s co-star  was a female model, you guessed it, all dressed in white.

Poppy was very patient and calm and posed for her two unique shots, one showing her in motion walking across a white rug and leaving a trail of paw prints as she went and another sitting to the side of the rug observing as the paw prints were hoovered up. 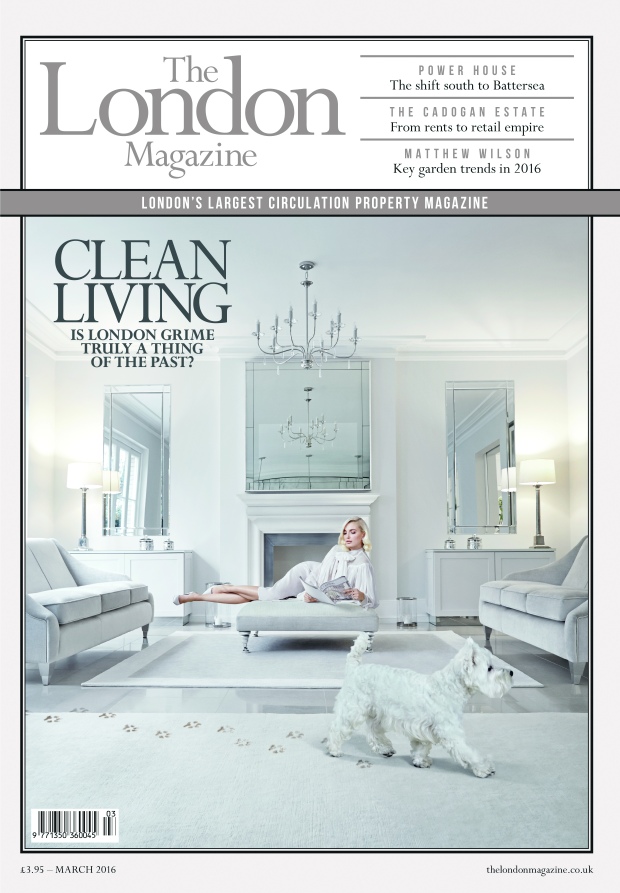 Its always a special honour to be chosen for the front cover, especially for a prestigious publication. The London Magazine is all about hot property, cool design, heated debate. It is also classed as London’s largest circulation property magazine.

Here at PetLondon Models there is never a dull moment and it is not just all about photoshoots and feature films. We are also often asked to help with special events, parties and promotions. Some of these require a lot of behind the scenes planning and its always a delight to work on these exciting projects.

Petlondon Models was commissioned  to create a unique event which was to consist of Food, Drinks, atmosphere and a crowd of canines, to celebrate the launch of a new DVD of one of America’s top adult cartoons; The Family Guy. Family Guy is created by Seth MacFarlane for Fox Broadcasting company. The series centres on the Griffins, a family consisting of 5 members and their anthropomorphic pet dog Brian. The mission was that this event, would be black tie, catered for dogs… and in honor of Brian, one of the main characters of the show.

London’s first ever fine dining and cocktail bar for dogs was launched in celebration of Family Guy ‘s pet dog Brian. Season 11 is released on DVD on 7th November.

With tight numbers for the guest list, we gathered together some special canine fans of the show, who varied in shapes and sizes but were all well socialised and great at being around other animals. The selected few  were in  for a promising evening of treats galore.

One of the main stars of the evening was to be a Look-a-like for the main character of the show-Brian. After PetLondon Models pulling many options for Disney to review, the final choice was made to use Lobo. Lobo is a Northern Inuit Dog who resides in Devon. He can sit, lie down,roll over, do a hight 5, 2 high 5’s, gives his paw and even give his paw in Spanish.

Now that the guest list and star dog were chosen we had to set to work on some serious party planning. The requests for the evening included; luxurious dog bowls and cushions for all the animals, all in the brand colours of course. A canine mixologist, black tie serving staff, a 3 course menu, treats to take home and a spokesperson to announce the highlights!

For the entire evening the event was going to take over a pub in Islington. The guests were to have drinks, eat 5* specially prepared food and to mingle.  Film crews and photographers were capturing the whole event on camera.

After arriving early to set up the room with all the props that included colour co-ordinated table clothes and paw print balloons, the preparing of the special food was done on site.

The delicious offering for the dogs was a 3 course meal served off silver platters. To start with was a Bow Wow Chopped Liver Bone Parfait. For the mains a choice of Paw Licking Chicken or Rovers Risotto & Meatballs. To finish some Pawtisserie selections! 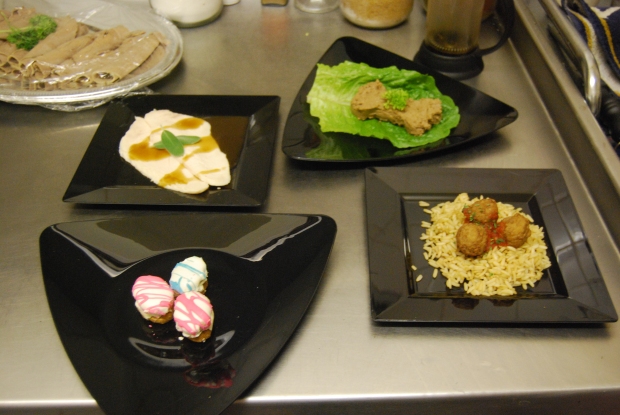 There were empty plates all round and the starter especially lasted just a few seconds on most of the guests plates before it had vanished from sight .

Most guests preferred to sit at tables on chairs and ate in groups of 2-4 on a table. Anyone who could not manage to finish all their foods would most likely find a friend to their right who was happy to assist.

Drinks were also well planned out for the guests. The special canine mixologist had prepared some “Dogtails” that included Hair of the Dog, Salty Dog and Mutt-ini’s. All used dog friendly ingredients such as mango and coconut and were served with a Rawhide Swizzler stick.

The Salty Dog was a firm favourite with many dogs reaching their third glass during the evening. Drinking straight from the cocktail glass did not phase anyone and they were probably wondering why their mealtimes could not always be such a civilised affair. 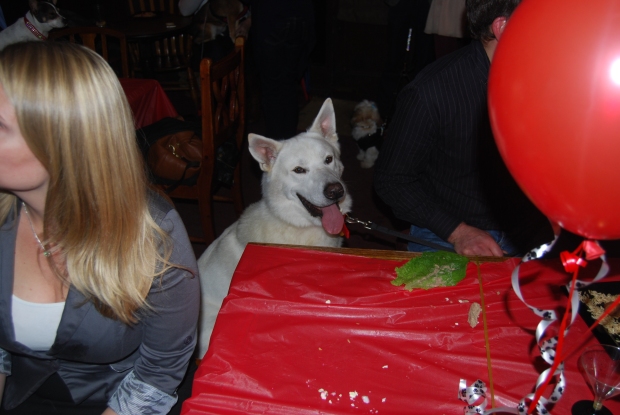 Lobo was the star of the show but took everything in his stride and remained calm an relaxed, unfazed by all the attention. As the largest dog at the event he stood out and enjoyed the events unfolding.

The evening was an outstanding success. The guests all had the time of their lives and to end off the night there was a specially prepared dog cake that featured Brian and the Family Guy logo.

Many images from the evening appeared in the national press and were enjoyed by all those who saw them.

Town & Country Magazine were in touch with PetLondon Models looking for a very special equine model to star in a shoot to celebrate the launch of the new Bond movie. The photoshoot was to held at Althorp House  Althorp is a Grade I listed stately home, estate and small civil parish in Daventry District, Northamptonshire, England of about 13,000 acres.

After proposing and reviewing several options a decision was made to use a stunning three year old stallion-Pearl of Peace.

Pearl of Peace is a very rate double colt with a golden coat. He is one of the only to be bred in England. His gorgeous coat colour is known as isabelo and it literally shines like gold.  Pearl of Peace is a large and stunning horse and a fantastic temperament as well. He is bred to be a Grand Prix Dressage horse and at this young age is already showing aptitude. His grandfather is the number one dressage stallion in America and his half brother won a silver medal at the Athens Olympics.

After travelling up to Althorp House the evening before the big day, Pearl of Peace got settled in for an early start on the grands and met his co-model, Naomie Harris. The two got on very well and made a perfect pair to create some dazzling images. 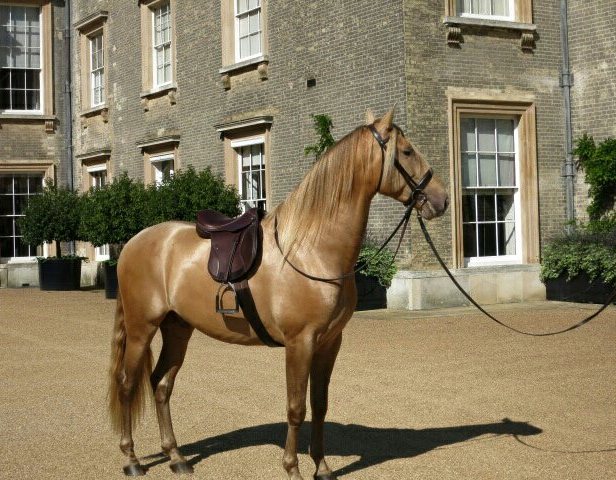 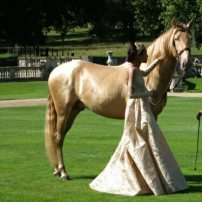 Naomie Harris stars as Miss Moneypenny in the new Bond film, she portrays a unique new portrayal of an iconic Bond character.

The weather could not have been more perfect for the day of the shoot and sun was gleaming off of Pearl of Peace’s coat. Naomie shimmered too in a selection of ball gowns. Here is one of the delightful final images that appeared in Town & Country mAGAZINE. 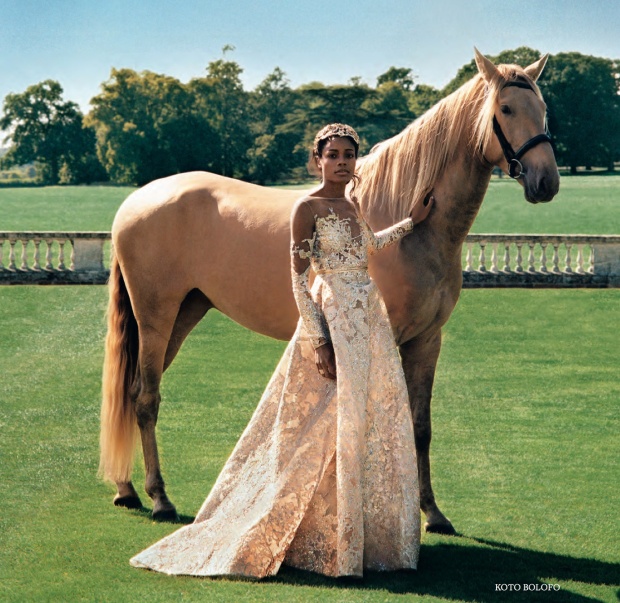 The client was thrilled with the end result and commented “Everything was perfect, Pearl of Peace was such a gorgeous colour in the sun, the weather was amazing“.

We have all had the feeling when cleaning up a room strewn with toys, wouldn’t it be nice if Fido could keep his own toys tidy. Well that is not impossible! Have a go with these training tips and see if you can have your dog put his/her own toys away when requested.

Adamals Top Tip: remember It will take lots of patience and practise, this is not something to be mastered in a day!