If the summer of 2018 had to be defined by two things, they would be football and glorious sunshine. Even though England didn’t make it to the final, the nation was gripped with World Cup fever and is only just starting to recover from the obsession that swept the country in which national pride hadn’t been at such a peak since London 2012 Olympics. 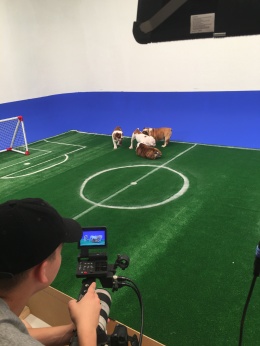 We’ve not sure anyone was keeping score!

The campaign was designed to be broadcast alongside England’s last sixteen game versus Columbia with the intention for the video to calm nerves for those who couldn’t bear to watch the action. And boy did we need some stress relief with the match going through to penalties.

The classic English bulldog puppies were an obvious choice with adorable Maltese-Bichon puppies their bitter rivals. Not much acting was needed for this particular assignment, just a whole lot of tail wagging and playing. The puppies were spoilt rotten during the breaks with treats and cuddles from the crew.

For your enjoyment there’s a full 90 minute video, so kick back and relax whilst you watch probably the cutest football match on earth.