Socialisation refers generally to the process of teaching your dog how to function in the world. Encompassing everything from learning how to get along with humans and other animals, as well as facing new challenges and environments with the aim being to adapt in a calm and confident manner. All this leads to dogs living a less stressful and enjoyable life, promoting in turn a higher quality of living.

The key to raising a well-adjusted dog is to start early! Puppies like children, are able to absorb a whole host of information during their early formative years. Learning about the world around them is a huge part of their development. Although it is not possible to introduce your puppy to every possible meet up or social occasion; proper early socialisation will allow your dog to adapt faster to new circumstances throughout their lives. Even though the foundations of experiences and behaviours are established in the first few months of their lives, learning just like in the case of humans never ceases even during adulthood.

There are a variety of socialisations scenarios with the most important including:

The benefits are multifaceted with the principle aim of reducing fear in these difficult circumstances and being able to teach appropriate and inappropriate responses to stimuli in differing environments. 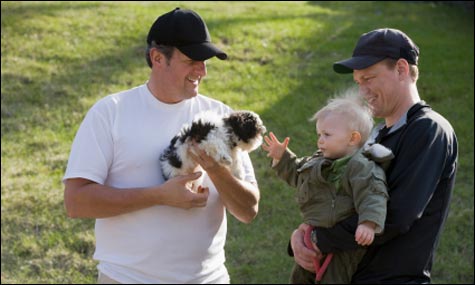 Owners are the most important person in each dog’s life and therefore they will be learning about the environment from yourself. Even though at times a difficult task, the rewards are endless, including knowing that you have raised a happy and well-rounded dog. Although each case is different, all pets can benefit from the following suggestions.

Socializing your dog with other dogs is a smart thing to do, even if you have no intention of owning multiple dogs at the same time. Dogs are very social creatures and sometimes just need to have the company of their own kind. It is such a joy to watch dogs interact and play with each other. However, if you have a dog who isn’t socialized, you and your dog could be missing out on great experiences.
Before joining the local dog park and thrusting Fido into the mix, start off by taking your dog for a walk with a friend and their dog that has, preferably, an easy-going temperament and that is known to act well with other dogs. Keeping the dogs on their leashes with firm control is important, especially at the initial meeting. Just give them time to sniff each other and make their introductions, and then begin walking them. Watch how they interact, and you may soon see a companionship forming.

If you join a dog park, it’s best to bring Fido when it isn’t too crowded. Ease your dog into the group, which might be a bit overwhelming at first. Go by your dog’s timetable. You have to read their cues to see when they are ready to interact with others, whether people or canines.

There are various places to find similarly minded people. Dog meet-up groups are a great place to interact with fellow dog lovers. They vary in size and location, but happen across the UK only a weekly basis. Have a look at http://www.meetup.com or find specific ones to your location or breed on social media sites such as Facebook. We’ve found a London Pugs Meets Here and also a Dog Party in Petersfield this weekend!

Properly socializing your pooch is a wonderful gift you can give your dog, your family, and yourself. It may take some time, but the benefits you reap will last a lifetime. It will make for a happier, healthier dog who is more enjoyable to be around and who is truly a member of your family. That is something all dogs want and deserve.

At 7am, Shelton Street, nestled in the heart of Covent Garden, is usually a quiet and tranquil place, with commuters walking to the tube in the early morning sunshine, a couple of joggers pounding the pavements and coffee shops just opening up their shutters; however, here at PetLondon Models we knew this wouldn’t be the case as we were tasked in providing 25 dogs for the launch of Cath Kidston’s brand new 101 Dalmatian range in collaboration with Disney.

Queuing up to Checkout

Our assignment was to provide 6 Dalmatians to be stars of the show, with 20 other dogs of varying sizes, ages and breeds to support them. Even though not close to the 101, it sure felt like it, as it was possibly a record number of dogs in one location at one time in recent history for PetLondon Models.

The 6 Dalmatian stars rose very early with their owners to get over to Covent Garden. For the participants it was a great experience. “We as owners, were a little nervous on arrival not really knowing what to expect!” said Celia, the owner of Suzy and Bebe. “We were put at ease immediately by the warm welcome to both ourselves and the dallies and was impressed with Adams professional handling of all the dogs.”

The Dalmatians came from near and far, very reminiscent of the film, to partake in the earlier part of shoot taking place in the store itself. Below from left to right we have the six superstars: Roo, Bebe, Suzy, Dolly, Mylo & Domino. We had a truly magical tear-jerking Disney moment, as Mylo & Domino found out they were siblings and have been reunited years later on this shoot. After the shoot was done, they were seen walking side-by-side to go for some brunch and a paw-to-heart. 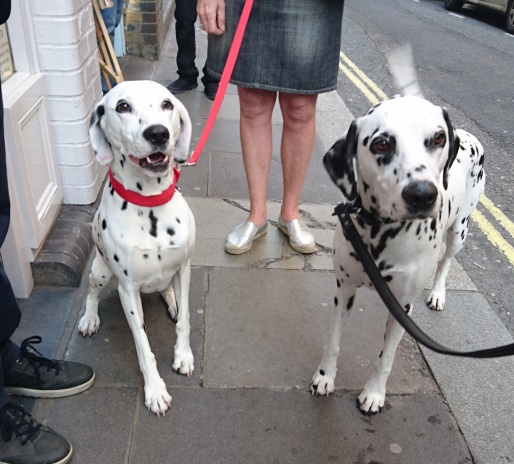 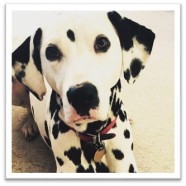 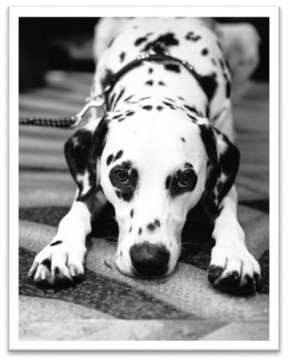 The goal of the shoot was to get some amazing shots of the Dalmatians in store and outside the store in some fun and candid setups. This included Bebe placing her paws on the counter pretending to pay for her goods, Roo walking out the shop happy as can be with a shopping bag in this mouth and a couple of the models sniffing around the shop itself looking at the Dalmatian emblazoned merchandise. 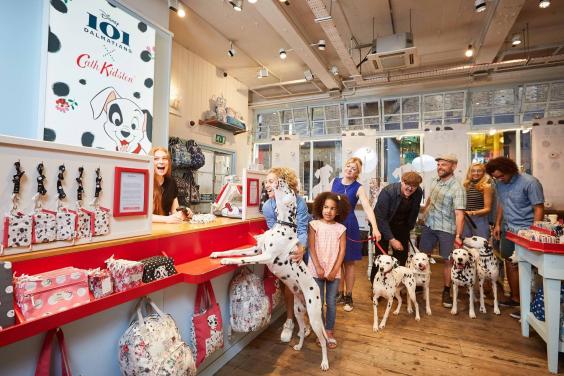 The Disney range itself is very varied with different designs and motives across a wide range of products; from tote bags to umbrellas, purses to socks, pyjamas to aprons each is classically Dalmatian themed, both for adults and kids alike. The range is available across all stores and online for the UK, and in selected international outlets. Please check here. 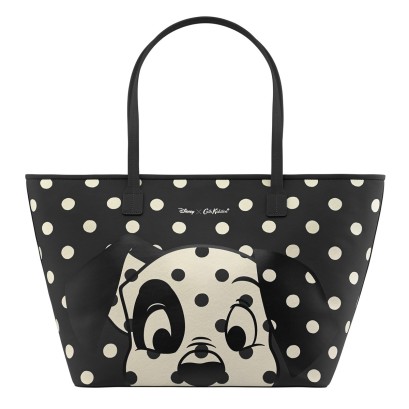 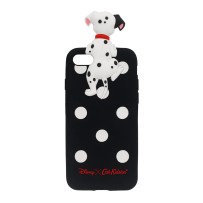 Whilst this was taking place, in a courtyard just around the corner, the rest of the supporting cast and crew arrived. Not only did we have twenty dogs, but also one human model for every animal. The cast included a range of typical dogs seen out shopping on your local high-street, so we had a varied collection of supporting cast including: Poodles, French bulldogs, Pugs, Jack Russell, Sausage Dogs, Spaniels and a lot more aside! The models were to each have a canine companion for the duration of the shoot. The dogs definitely chose their new pet parent for that morning and after a lot tail wagging and sniffing , we were ready to start the second part of the shoot taking place outside the store.

Lolly, Bix, Peggy, Lola and Milo chilling out on set

Models getting to know their new pet parents

The aesthetic was to line them up along the shop front with the Dalmatians at the front of the line, with each dog and their model forming a somewhat orderly queue behind. It was a very high energy set with so many models both human and canine together, but some amazing shots were taken. Lots of squeaking, clapping, barking and cheering to get the attention of the dogs. After some readjustments and repositioning of certain dogs, the camera team was able to snap some fantastic shots.

The hallmark of any successful job is finishing early, and this assignment finished a full 60 minutes ahead of schedule. All the dogs were pawfectly awesome and were as good as gold considering all the excitement.