A dozen PetLondon Model dogs descended upon Knightsbridge to promote the launch of department store Harvey Nichols new menswear department that is selling clothes by 270 designers in Central London.

Harvey Nichols, founded in 1831, is a British department store chain with a flagship store in Knightsbridge, London. It sells fashion collections for men and women, fashion accessories, beauty products, wine and food.

To celebrate the grand opening of the newly refurbished and relaunched menswear department some talented dogs were called in from us. A total of three different breeds all in groups of four; Bulldogs, Greyhounds and Afghan Hounds. At PetLondon HQ there was a lot of preparatory work needed. We set to task putting together some quads who would be happy working together and also had to take a series of measurements that would be used to create some custom-made outfits for each dog.

The event called for a very early start and some of our models set off very early in order to make it in time for the 7am meet and greet. This was a chance for all the dogs to get familiar with each other and for the male model appointed to each group to get acquainted with his animals. All the dogs were in high spirits and excited by all the fuss and extra attention they were recieving.

First on the schedule was a photoshoot with a photographer outside the stores main entrance and also on the square to the side of the store. The dogs posed in their groups of four of a breed with the male models.

From Left to Right, The Bulldogs; Queenie, Louie, Coco and Olive

Each dog’s outfit co-ordinated with what the human model was wearing. The Bulldogs that included sisters Coco and Olive, along with Louie and Queenie were wearing raspberry pink polo shirts and navy gilets.

The Greyhounds’ outfit was our personal favourite, they were wearing tailored suits complete with shirt collars and ties. All of the dogs in this group were especially charming and friendly. They looked so professional and dapper and the colour scheme suited them perfectly.

Finally, the Afghan Hounds in their bright orange cashmere. These girls and boys were from different owners but all related in that they all shared the same father. It was a great chance for a family reunion and there was much excitement all round. These dogs are show-stoppers, with their elegant flowing locks that were blowing in the wind, they were impossible to miss.

A variety of fabulous shots were taken of all the dogs, both static and on the move. Many of these made it onto social media and into the evening press with a great response from the public. 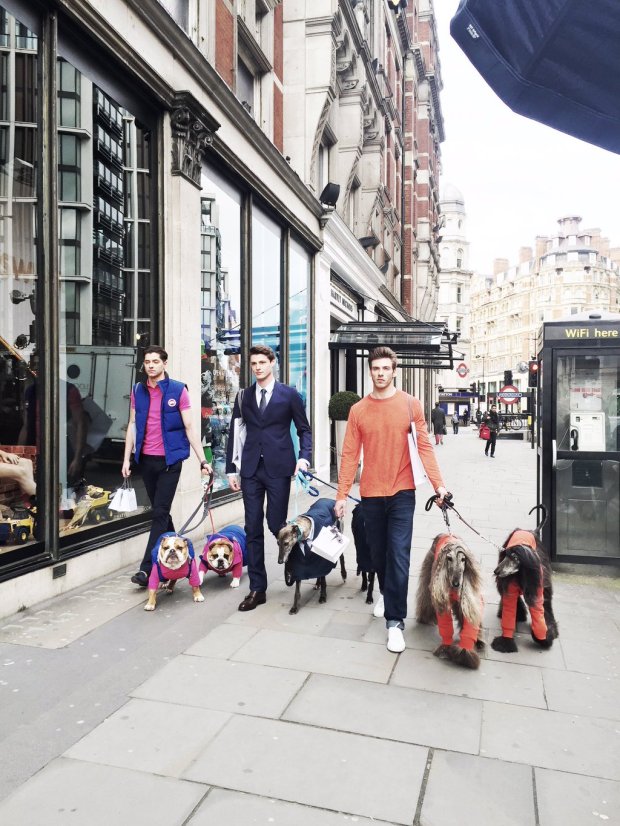 After the still shots next was a promotional walk around the perimeter of the store to hand out Harvey Nichols goody bags to the surprised but exceed passers-by.

PetLondon Models also took some behind the scenes footage. Here you can see the Greyhound group doing one of their walks outside the Knightsbridge store. A lot of passers-by did a few double-takes. Its not every day you see such a sight, even in London!